A Long Look Inside a Far Country 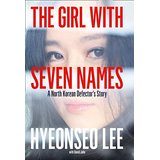 This week I’m endorsing a memoir, The Girl with Seven Names: Escaping from North Korea by Hyeonseo Lee.

I don’t know about you, but I find the whole country of North Korea fascinating, I guess because it’s one of the the last places on earth which is totally a country unto itself, with little to no outside contact. We get little information from that place, and what we do get, we wonder if we can trust.

So, when a Goodreads friend recommended this book to me I was intrigued  I bought it, downloaded it and read it. If you are not familiar with Goodreads, I’m on there all the time. Here is my profile and I’d love to be your “friend” and get book recommendations there.

The Girl With Seven Names follows the story of Hyeonseo Lee, who, when she was seventeen, waded the narrow river from her home in North Korea into China. She was able to evade the river guards and ended up a decade later, a decade of changed names, forged ID cards, harrowing escapes, and many scrapes, as a citizen of South Korea.

Before we go any further a few facts about North Korea might be in order. The country is currently governed (?) dictated over (?) by Kim Jong-un, son of the Dear Leader, Kim Jong-il and grandson of the Great Leader, Kim Il-Sung Some sources suggest that the moniker for the current dictator is Outstanding Leader.

Unlike many of the stories we get about the harshness of the worker class, the horribleness of the prisons there, Lee’s family was one of the upper classes. Still, however, every minute, every conversation, every word and deed was controlled by the government. She grew up across a narrow river from China, and whereas their electricity was turned off every night, the lights from China blazed. What was it like over there?

Like many Communist countries, a huge underground economy flourished, and Lee’s mother sold smuggled delicacies from China. These toys and trinkets and interesting food items fascinated the young girl. How could the Chinese be so rich when parts of her country and many in her family were dying of starvation?

Before you download and read the book on your own, have a listen to her short Ted Talk. It’s very informative.

Here are a few interesting “Did You Know?” facts I learned from this book:

- The Kims are worshipped like gods. Every school child will tell you that a new star appeared in the sky on the day that their Dear Leader, Kim Jong-il was born. Children put on plays about this. Both the birthdays of the Dear Leader and the Great Leader are holidays. (Sound familiar?) North Koreans say that everything in their land was “created” by their Great Leader.

- A framed photo of their Leader hangs in every single home in North Korea. It is a sacred photo. If even a few crumbs of dust accumulate on the photo, the owners of the house will be in dire trouble. And yes, homes are periodically inspected. Or if they’re not, and you’re visiting a neighbor and notice this, you are obliged to report them. Which brings me to the next point:

- Everything, everywhere is bugged. Once a week, students are encouraged to tell on each other at sanctioned events. People in workplaces also do this, and reporting any and all infractions on ones neighbors (and even friends) is very much encouraged. You will be in trouble if you don't.

- When Kim Il - sung passed away in 1994, days of mourning were prescribed. Citizens were required to file past and pay their regards. People were required to sob loudly. If you didn’t wail loudly enough, you could be reported. Lee, a child then, remembers standing in line for hours, crying and sobbing. If they didn’t shed enough tears, and if their tears didn’t look real, they would be severely punished.

Here is a fuzzy but fascinating You Tube look at the mourners. If it looks like people are out of control with grief, that’s what they had to do.

This happened again in 2011 with the death of the next Kim. Here is a video.

- When Lee finally makes it into South Korea, it’s not the end of the story, but her story becomes the sad and difficult story of every refugee. Despite its flaws, she misses her homeland, the friends she left. Her North Korean education was worthless and she had to basically start over. I appreciate the fact that the memoir doesn't gloss this over. 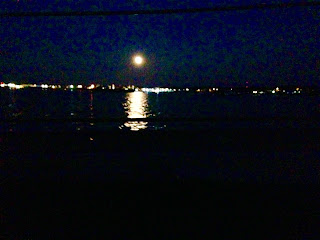 While this book opened my eyes to North Korea, It also brought to mind the plight of many refugees here in Canada - here in Fredericton where I live, even - and while, yes, they are happy to be free, it is not so strange for them to long for their homelands. To long for friends and family left behind. It has given me a bit more understanding.

In two weeks: Blue Mercy by Orna Ross
Posted by Linda Hall at 12:30 AM No comments:

I seem to be on a literary thriller kick lately because today I’m recommending another one, The Ice Twins by S.K. Tremayne. The novel features Lydia and Kirstie, two very identical monozygous little girl twins. The book describes them as “identical in every way.” They were so identical that their parents had to put different colored ribbons around their ankles when they were babies, so as not to mix them up. 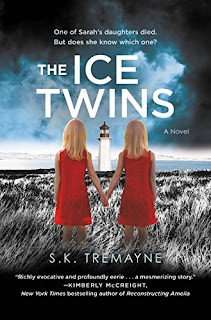 This little piece of information is important in the plot.

Here is the first sentence of the book:

Our chairs are placed precisely two years apart. And they are both facing the big desk, as if we are a couple having marital therapy; a feeling I know too well.’

And with that, we are introduced to Sarah and Angus, the couple who are moving from London to a solitary island off the Scottish coast that he inherited “to start over” after one of the twins falls to her death from a balcony.

Right off the bat, my “don’t go there” antenna is buzzing off the charts. This is a plot device used by many horror/thriller writers, and, really, it never gets old.

I’ve never been to an island like this, but I’ve watched enough Shetland to know that it has to be cold, full of fog and is surrounded by unforgiving slate gray seas. And ghosts. There have to be ghosts.

When the surviving twin claims to be her dead sister, and that her parents “got it wrong”,  that's when the story really begins. I won’t go any further without spoiling the plot, but it almost delves into a Stephen King territory - a realm I LOVE in novels, by the way,

And there is a storm. Of course there is a storm. There has to be a storm. And even with all these plot devices that we’ve seen a million times, I found I could not put this well-written book down and kept swiping page after page on my Kobo.

There are many suggestions that these twins were special, so identical as to be eerie, and that science and doctors had been keenly interested in them. And then on the other hand we get sentences like this:

He’d read the science: there was no such thing as twin telepathy, just the ordinary miracle of identical twins.

So, the reader is constantly back and forth. Which parent is telling the truth? Which of the three family members is spiralling down into insanity? Maybe none of them? Maybe it really is a ghost?

I think we all have a certain fascination with twins. What would it like if there were two of me? I’m sure we non-twinned singular people have wondered that every so often. Thing is, if you were a twin, it wouldn’t be two of you, it would be one of you and one of someone else. Twin novels so fascinating.

Yes, identical have the same DNA. (Which is a great plot device in modern mysteries, and yes, it has been used, but it’s still fun. I remember a CSI episode where not only were their twins, but triplets, all with the same DNA left at the crime scene.)

Identical twins, however, do not have the same fingerprints. That little fact of information is all over the internet, but in the case of this book, the dead twin has been cremated.

If you love literary thrillers, remote islands, lighthouses and gray seas, then I highly recommend this book. 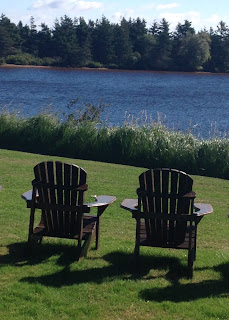 There is also a fascinating Netflix documentary about twin South Korean girls separated at birth and adopted, one to the US and one to France. The girls “found” each other on Facebook. Twisters is on Netflix and is quite interesting. Here’s a Huffington Post article about the documentary.

Next Time: The Girl with Seven Names: A North Korean Defector’s Story
Posted by Linda Hall at 12:30 AM 2 comments: