I love corporate singing. Whether it's in a church, within a group, a choir, or even old bar songs in a pub - you will find me singing along. So, yeah, I love singing in a group.

Today I am recommending that you read an article that I've been thinking about a lot lately. It's entitled What We Lost When We Lost Our Hymals. The author is Tim Challies, a Toronto blogger, book reviewer and pastor.

I love corporate singing, but a lot of people, I guess, don't. The other night here at the community where we are staying for the winter, we had a Christmas potluck followed by an acapella Carol sing. They passed out carol sheets provided by the local newspaper. (These actually had the music and not just the words. I was impressed!) 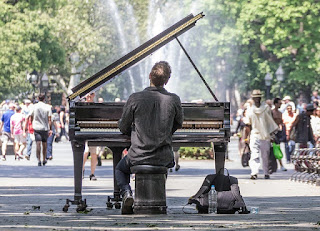 But the carol sing soon deteriorated into people talking amongst themselves, or getting up, or pouring more glasses of wine. At the end of one song I realized that the only people actually singing were me and the woman beside me, who had a beautiful soprano voice. We ended up looking at each other and laughing.

What I miss about the hymnbooks is the actual music, but then I may be different because I have studied music - piano in my childhood, guitar and a few voice lessons. The actual musical notes are important to me. But we have also left the days when every child had piano lessons.

Challes writes that he's not altogether sure we 'should' go back to hymnals, that somehow screens are here to stay. It would be like going back to no TVs, iPads, Kindles and Kobos (and I love reading from my Kobo!), but there is much we have lost and are losing.

There are a few takeaways here, though. I really appreciate what he says about church worship sometimes being more about 'enthusiasm', than actually worship. I love the quiet pews, the stained glass, the pipe organ. I like sitting there and not having to 'do' anything, but just to "be'' there, resting.

But then, sometimes I think I must be turning into a fuddy duddy!

I would love to know your thoughts on this.

-The photo above is courtesy of Pixabay, a free site for artists and bloggers-


After almost a year's hiatus from this blog, an announcement and article has piqued my interest enough for me to pick this blog back up again. What I am recommending today is Time Magazine’s article The Guardians and War on Truth. Time Magazine is naming slain and imprisoned journalist as Persons of the Year for 2018.

The link to the article here. Read it. Watch the video. With this, I will be re-launching this blog of mine. Yes, I will review books and other media, but I will also draw to your attention, articles in magazines (like this one) that I think are important. I will point you to blogs, as well as podcasts.

Plus, because so many of my readers are my Facebook Friends, I plan to copy and paste the same information onto my Facebook page with posts that I will make ‘Public.’

When I was a young person all I wanted to be was a journalist. I would walk into a newsroom and salivate. When I got my first job as a news “stringer,” I remember getting down on my knees. I had been given a sacred trust and I prayed that I would never, ever forget this. To the best of my ability I would strive as best I could to be honest and truthful. My regular “beats” were city council, school board, college board, plus numerous features and light pieces. I wanted even the feature articles I wrote about craft fairs and figure skaters and track meets and art shows to bring shalom to my community.

Later on, when I went from writing articles to writing literacy materials and eventually to writing novels, my prayer has remained the same - that my writing will bring peace, health and honesty.

This is the prayer of most journalists. Contrary to what you may have heard, there isn’t this huge conspiracy of corrupt journalists seeking to bring down the government. Heavens, we don’t get paid enough for that!

At a time when democracy is threatened all over the planet, this profession is vital. Journalists are the link between despots and the people. They bring worldwide suffering to our attention. When you see soldiers on their way to battle, there is also the PRESS not far behind, holding up their huge cameras to bring you the story.

After a gunman entered the newsroom of the Capital Gazette in Washington DC this past June and shot dead Gerald Fischman, Rob Hiaasen, John McNamara, Rebecca Smith and Wendi Winters the editor wrote this:

“Tomorrow this page will return to its steady purpose of offering our readers informed opinion about the world around them, that they might be better citizens.”

The Capital Gazette is a local newspaper like a lot of newspapers, like the papers I wrote for, like the one you probably read. They bring you the hockey scores from the local kids’ games, the visit by Santa, the local weather, your city or town council budget, plus features of interest such as photos of that new police dog, the woman in your town who is still watercolor painting at age 90, and what roads to avoid because of construction.

And then there are the larger papers who bring you photos of that war torn country that you might not ever see—the children, the families, the devastation that climate change is wreaking on our northern communities, pictures of that oil spill, that forest fire, the in-depth profiles of that despot, the awful flooding. Journalists bring you the world.

My advice has always been to never get your entire news diet from one source. That's a sure fire way to become narrow minded. (If you are, then stop immediately!) Read widely. Watch widely. Read with discernment and if someone tells you "that's Fake News," don't take their word for it. Find out for yourself. Journalists are not the enemy of the people. Journalists speak for the people.

I am proud that Time Magazine has honoured journalists this year. May we all become "better citizens."

Posted by Linda Hall at 6:32 PM No comments: