I’m back to recommending short stories today. A few months ago I endorsed Wet Thaw, my friend’s little eBook of two stories, as well as Susan Berliner’s book, The Sea Crystal and Other Weird Tales.

In that blog, I mentioned in passing The Man Who Built Boxes and other stories by Frank Tavares. 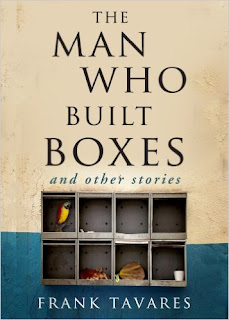 I love the fact that these days short stories are easier to find and enjoy. Before the advent of Kindles, Kobos and digital material, readers were hard-pressed to find many short story collections for sale anywhere. Oh, I suppose you could meander into a dusty library and thumb your way through some literary journals, but beyond that, they were mostly out of reach. Not anymore. Now they are as close as your Amazon bookstore (which is where I purchased The Man Who Built Boxes.)


A short story is a slice of life—one day, one afternoon, one emotion, a couple of characters at most. Sometimes—not all the time, but sometimes—you are left hanging at the end. You often have to come up with your own ending to the story. I like that.

I first read this collection of a dozen stories about a year ago. I’m not even exactly sure how I found it or when and why I purchased it, but when I was casting about for something quick and easy to read, I found it on my iPhone’s Kindle app. I read the first story in the collection, My First Ex-wife’s Third Wedding, and to put it bluntly, I was blown away.

I have since discovered that the author, Frank Tavares is known as the “voice of NPR” radio. I did not know this. His name was unfamiliar to me. Being Canadian, the only NPR I know are the podcasts that I listen to (and totally enjoy, by the way). I also learned that he teaches communications and writing and that his many short stories have “appeared in a variety of literary journals…” You see, that’s my point. That’s what I’m talking about. Normal people don’t have access to literary journals. We don’t even know where to look. And that’s what makes our online world of “any kind of books you might want to possibly read” so really great.

I usually look for two things in the books and media I endorse here. Good writing and good story. These stories had both of these in abundance. Whether it’s the utterly convoluted relationships in the first story, My Ex-Wife’s Third Wedding; the very bizarre tale of Girl in a Box, or the heartbreaking character in Accident With a View, these are little slices of life you won’t soon forget.

I always include first lines in my blog, and so to whet your appetite, to draw you in, here are a few first lines.

Doin’ the Laundry -
Ron-Allen Tucker knew his wife had decided to kill him.

The Man Who built Boxes -
This time it hit John Dodge on the morning of this forty-third birthday.

Antonio’s Yard -
Antonio Enzo Marino was aware of the shift when he woke up a half hour early.

Secondly, there are his imaginative ideas themselves. Why Jimmy Mendoza Hated the Late Tamale Jones features a living man's conversation with his dead friend, who, while they are chatting at the funeral, picks up a cigarette. The story describes how the smoke "seeps from the autopsy sutures in his chest." I loved that very Stephen King-ish visual image.

Here’s yet another sentence I loved (Loved it because I've done it myself.) -
She bought a paperback and hid herself in it.

In Antonio’s Yard, the earth itself is falling away, even as Antonio’s life and aspirations and hopes are also.

And then there is the story of a dying young woman who carries the tattoos of the faces of every person she has had a relationship with.

The title story is about a man who builds hundreds and hundreds of exquisite boxes, and whose entire house is filled with them.

Even now, I can hear my mother saying, “Who comes up with this stuff?”

The beauty of Tavares writing is that the stories seem like they could be real. His characters talk like us, behave like us. We can almost see ourselves in them. Back when I studied writing I remember one of the cardinal rules in dialogue is to write it the way people think they talk, not the way that they actually do talk.

Tavares has presented characters to us that feel so intrinsically real that we can almost identify with them, despite the very odd circumstances they they find themselves in. 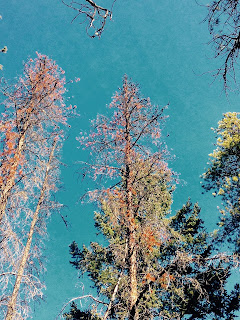 At the end of this collection of a stories is a sample chapter of an upcoming book - Digging up Mr. Bradley. Well, I’m waiting for that book, Mr. Frank Tavares!

Next time - It’s back to mystery fiction with The Cutting by James Hayman.
Posted by Linda Hall at 12:30 AM