It's about time I read this author's work!

Before reading Five Quarters of the Orange, the novel I am recommending today, I was not familiar with this author’s work. I never even watched the multi-academy award winning movie Chocolat.

Watching the trailer I get a sense of what the movie is about—Woman comes to town. Woman takes over abandoned building. Woman turns it into a successful eatery. In the case of Chocolat, it’s a chocolate shop across from a church. 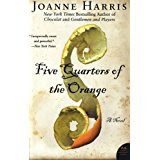 In Five Quarters of the Orange, it’s a crêperie.

And, that’s where the similarities end. The trailer for Chocolat calls it a comedy. Five Quarters of the Orange is anything but. I would call it a tragedy cocooned in mystery.

I guess it’s the mystery reader/writer in me, but I love stories which revolve around mysterious tragic secrets. For that reason, Five Quarters of the Orange does not disappoint.

Framboise, the main character in this book, was driven out with her family from their small French village during the war, following a tragedy. She returns fifty years later in disguise to try to rebuild her family’s abandoned farm.

The book deftly moves between "past" and "present." During the “past” portions of the book, we get a glimpse of small town France during the German occupation. Framboise is nine then, and along with her older sister and brother and single mother they work on the farm, collecting eggs and and helping to make jams and other things to sell at the local market.

The river Loire plays an important role for the children. It’s their secret place, their swimming hole, their fishing place, a place where they store their “treasures,” and the place where "Old Mother" resides. She’s not anyone’s actual mother, but a huge pike, a fish that no one can catch.

The story's mystery revolves around one particular German soldier who befriends the children. I won’t say more. Somehow I knew that the catching of Old Mother would usher in the deadly end of the book. And that it would involve him.

Fifty years later, the now widowed Framboise, under a new name and in disguise, returns to her childhood abandoned farm, the place where her family was cast out so many years ago. She has a copy of her mother’s recipe book which also includes scribbled margin notes by her mother which give Framboise a new and different look at the grim, sickly and stern mother she grew up with and never knew. Framboise wants to restore the place. And she does, finally opening up a successful crêperie.

But the past can never be truly erased, can it?

Food is a constant throughout the book, and I hadn’t noticed this, but one reviewer mentioned that a lot of the characters are named after foods. Framboise being the main character and also there is Pistache, Noisette and Prune. (I admit I stumbled a bit on the name “Prune.” Who names a child Prune? Well, maybe in French it sounds different.)

The writing was superb. Every sentence sings.

Here is the first:

When my mother died she left the farm to my brother, Cassis, the fortune in the wine cellar, a jar containing a single black Périgord truffle, large as a tennis ball, suspended in sunflower oil, that when uncorked, still releases the rich dank perfume of the forest floor.

This beautiful prose progresses and and a story that captured my attention until the dark climax, which was worse than I had even guessed.

If you love extremely well-written historical fiction and demand a good plot at its core, I highly recommend Five Quarters of the Orange. 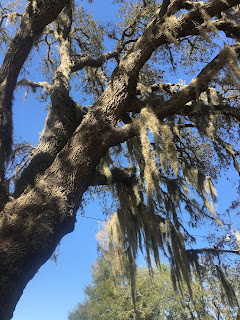 I will read more of Joanne Harris, that's for sure.

In two weeks: Another thriller - Safe With Me by K. L. Slater