Today, this last August summer day, I'm pleased to welcome mystery author  Carol Sojka to my blog. Welcome Carol, tell us about yourself and your newest novel. 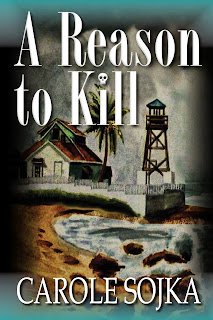 A Reason to Kill is a mystery novel. Nine strangers meet on a Florida beach to observe and protect endangered loggerhead turtles laying their eggs. One of the observers dies of poison and another is killed soon after. It's up to Andi Battaglia, a rookie detective in a small Florida town, to find out who among the remaining observers has a reason to kill.

That sounds extremely intriguing, Carol! Since this is the Summer on the Water blog, how does water fit into the story?

I visit the Treasure Coast, Florida's Atlantic coast north of West Palm Beach, at least once a year. I became interested in the area, and several points of interest are in my book. The group observing and protecting loggerhead turtles meets at Hobe Sound, a beach where such excursions take place. The Gilbert's Bar House of Refuge is the last remaining one of the refuges established by the U.S. government in the nineteenth century to provide havens for shipwrecked sailors on the barrier islands, which had no inhabitants, no food and no fresh water. Bathtub Beach is where I set the final confrontation between the murderer and Andi during a violent thunderstorm, although the novel's beach configuration is different from the real beach. Still, I love the name.

I love the water: oceans, lakes, and pools. When I was younger, I was a great swimmer, both in the Atlantic Ocean and in lakes. I grew up on the east coast and spent summers at the beaches near New York and at a lake in a rural area north of the city. In my twenties, my husband and I moved to Southern California where we spent time at the beaches of the Pacific and in our pool. My husband was a diver, and although I never did very much of that, I did dive in Baja California and Hawaii as well as in the Indian Ocean when we were Peace Corps volunteers.

How has being an Indie author worked for you, Carol?

After I had written three novels, I found that my efforts to find an agent didn't have much success and an interested publisher ultimately didn't work out. I am on the board of Sisters in Crime/Los Angeles, and several members are self-published. I talked with one who had self-published her books with Create Space and was happy with the result. I decided to try it. I'm pleased with the books. They are professional looking, the process was simple and the Create Space team was helpful. I have had to learn--and am still learning--about marketing, but I don't think there there is much advantage in having a publisher, for all the authors I know, with publishers and self-published, do most of the marketing work themselves through Facebook, GoodReads, Amazon and a variety of other social networks.

Now for the fun question. You are asked to give a Ted Talk, what would you talk about?
My Ted Talk would be aimed at those who say they want to write but don't seem to be able to find the time or the energy or the ideas. Even fifiteen minutes a day is a start. When I read Julia Cameron's The Artist's Way, I got up at 4:30 a.m. to write three pages every day for years. Ultimately, they weren't worth much, but they freed me to sit down and start writing.

Yes, a long time ago, The Artist's Way was my bible as well! Thanks for reminding us of that great and motivational book. Where can readers find you and your books? 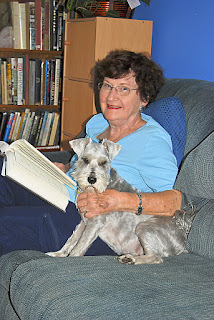