Mid-august and still as hot as ever, even though here in Canada, summer is—dare we say it—beginning to wind down. (Oh! Say it isn't so!) Although where my next writer guest lives it's probably hot as ever! Right, Bobbi?


I welcome short story author Bobbi Chukran today to Summer Short Story Spectacular, Season 1, Episode 10. Hard to believe there's been 10 episodes already! If any of you have missed any of the episodes, just click on the links to the side of this blog and you'll get caught up on some great reads!

Bobbi Chukran is a native Texan, born in Ft. Worth. She grew up in Grapevine then moved to Austin to earn a B.A. degree in Studio Art/Design. Her first article was published back in 1982. Bobbi wrote and published non-fiction for over 25 years until she finally turned her attention to fiction. Her first historical mystery novel, Lone Star Death, was published in 2006 and she launched her contemporary Nameless, Texas short story series last year.


Bobbi lives in a small town outside Austin where she has numerous opportunities to observe strangeness and quirkiness---all fodder for her fiction. 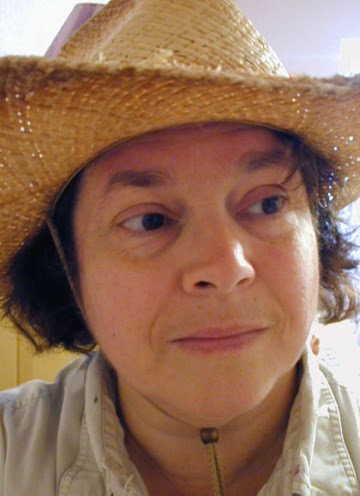 What is your all-time favorite short story, Bobbi and why?

It's hard to choose just one if you're talking about stories written by others. In general, although they aren't mysteries, I love Bailey White's stories. I love small town stories about quirky, sometimes funny people wrapped up in suspense, and to me, hers are suspenseful in their own way. I always wonder how they'll turn out and that keeps me reading until the end. Her characters are so familiar to me. For years, I wondered why that was and finally realized it was because my grandmother was born in Alabama and passed along a lot of that "Southern-ness" to me---although I'm a native Texan.

My favorite story that I wrote is a new one, The Passing of Big Mama Mayhall. It's based on my memories of kinfolks' funerals and some quirky characters I've known (and have been kin to). Although it's come very close a few times, at this time, it's still unpublished. I'll probably include it in a collection of my stories I'm putting together now. It's one of my more "Hitchcockian" stories and those are the kinds I love to write. Small town tales of revenge seem to be my thing.

What is the most difficult part of writing short fiction?

The writing of short fiction comes easy to me for some reason. Probably because I see the story as a short movie playing in my head and frequently see the ending before I start. Maybe because I've been writing short stories since I was a young child. At one time, in a previous life as a non-fiction author, I wrote thousands of short profiles of artists and business-people. I also write short plays and many of those are just ten-minutes long-—about the size of a short story. So I think that length is sort of ingrained in my mind.

Another thing is that I watched a lot of television growing up, and many of those shows were 30-minutes long. Somewhere along the way, that length became, to me, to be the perfect way to tell a story.

One of the hardest parts, I suppose, is that I want to write mystery and suspense, and my quirky, funny writing sometimes doesn't lend itself to a story where murder is the centerpiece. So it's a fine line juggling those two things. I've tried being more serious, but I'm afraid at this point it's impossible for me to change.

Secondly, I know I need to write something longer, another novel, in order to get the attention I need as an author. That's more of a marketing thing, though.

Commit to doing the work and don't expect to get rich writing short stories. So many new writers just don't want to do the work required.  Read thousands of short stories in all genres and especially any that really attract your attention. Track down and read the vintage pulp stories if you're interested in those. They're readily available these days. And there are thousands of older stories online that you can read for free.

Read "how-to" books on writing short fiction (although I have found very few really good ones) and none that talk specifically about writing mystery fiction.

Realize that a short story is not just a novel that's shorter—the structure and whole purpose of the story is different. Then, when you're ready to submit your work, start small. Swap stories with author friends you respect and take their advice. There are lots of online 'zines out there, and many of them will publish crime and mystery stories. There aren't as many outlets for traditional (cozy) mystery stories, unfortunately. Many authors I know write in several genres, making it easier to market the stories.

And the old adage of "writing what you know" applies to short stories, too. I call this "authentic writing." Some of my best stories are those set in small towns about quirky characters that fall into trouble through no fault of their own. Most of my stories were inspired by things that really happened, snippets of conversation, or people I've observed. Use those observations, because they are a gold-mine for short stories. TAKE notes!

I have a handful of short stories online that can be read for free, and I have my Nameless, Texas series for sale on Amazon as e-stories

My favorite free story is "Sadie and the Museum Lady," published in the excellent online 'zine, The Dead Mule School of Southern Literature. 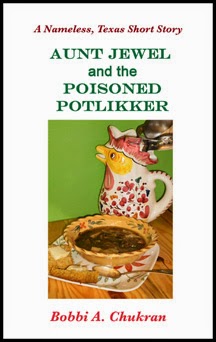 Well, Bobbi, I read Aunt Jewel and the Poisoned Potlikker and even though I'm a northerner through and through  it was positively delightful! There are some things that are universals, and small towns wherever they may be all have certain things in common. Where can my readers find you, Bobbi?